Often when running schedule risk analyses, I get asked “why are the results always showing a late project completion?” This usually gets asked when there is a proportionate (or equal) distribution of schedule opportunity as there are schedule threats.

The answer often is due to a phenomena known as Merge Bias, or Nodal Bias, and is a feature that has no equivalent in Cost Risk analysis. It is unique to schedules due to the logical relationships between activities. This article will provide a simple demonstration of Merge Bias and its impact that can assist in explaining why project completion may always return a later than expected result.

Consider the following example of a single activity driving a completion milestone, the activity (and whole project) most likely duration is 100days, there is minimum duration of 80days, and a maximum of 120 days. Therefore an equal probability of the activity finishing earlier or later than the original deterministic duration. The results of the analyses using Netpoint™ and NetRisk™, are shown below.

When only a single activity drives the completion milestone, the result is as expected based on the 80/100/120 range applied to Activity 1, the P50 result is 100days, and the original completion duration has a 50% chance of occurring:

When two activities drive the completion milestone, the P50 result is 104days, and the original completion duration has a 25% chance of occurring:

When four activities drive the completion milestone, the P50 result is 108days, and the original completion duration has an approximately 7% chance of occurring:

Across the above results:

This is the merge bias effect, and the results for project completion are compounded by the number of merge bias points through a schedule that are effected by schedule risk.

Typically schedules are built with complex logical relationships between activities. The likelihood that there are merge bias points spread through a schedule are high. Consider the following examples of schedules reviewed: Activities with greater than or equal to 2 successors or predecessors are plotted against the schedule timeframe (the size of the circles is the proportion of driving relationships): 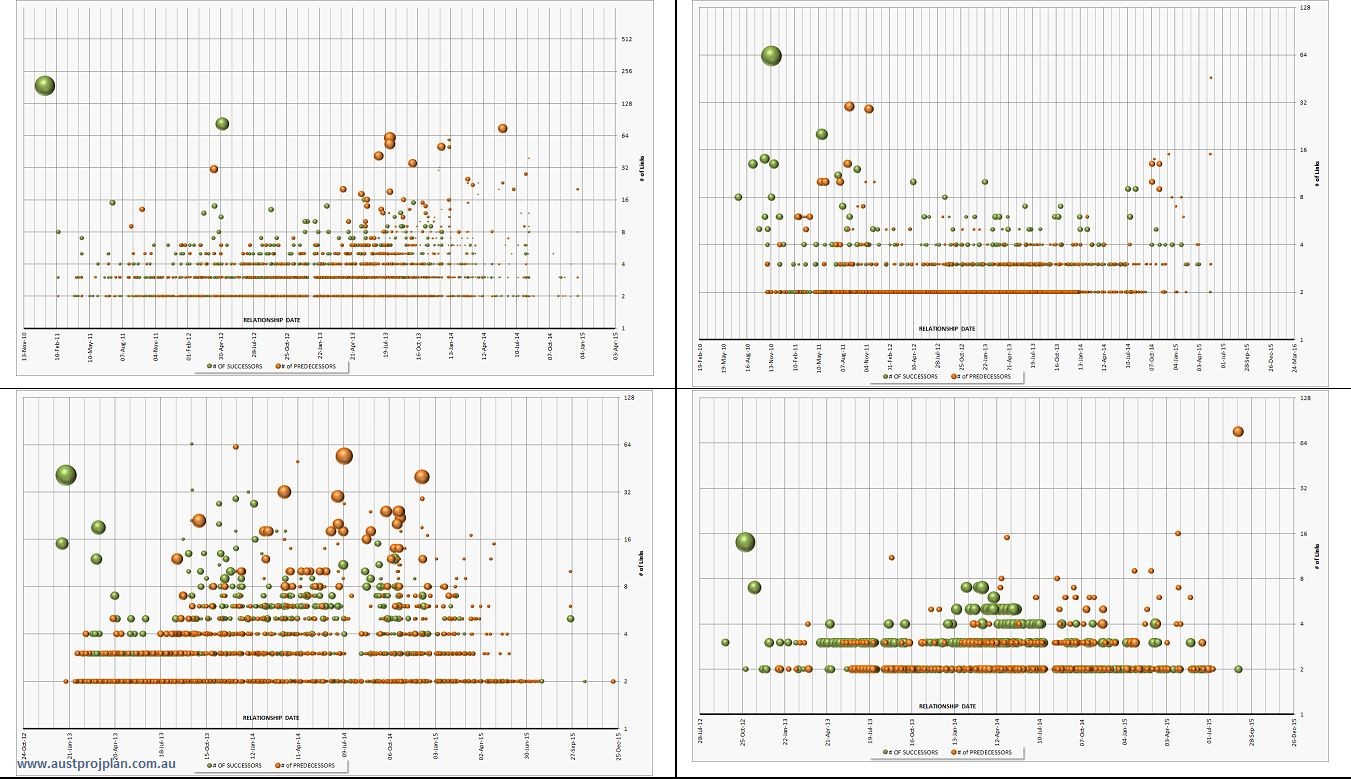 As can be seen from the above examples, merge points occur throughout schedules, and can be a significant influence in schedule risk analyses.